According to Moon Express the Lunar scout will “demonstrate the cost effectiveness of entrepreneurial approaches to space exploration, carrying a diverse manifest of payloads including the International Lunar Observatory, “MoonLight” by the INFN National Laboratories of Frascati and the University of Maryland, and a Celestis memorial flight.” 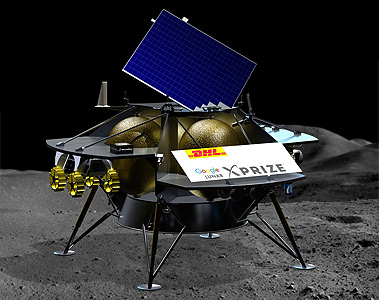 According to Astrobiotic Peregrine will “precisely and safely deliver payloads to lunar orbit and the lunar surface on each mission. Payloads can be mounted above or below the decks, and can remain attached or deployed according to their needs. During orbit and landing, cameras, IMU, and LIDAR enable the craft to perform an autonomous safe landing within 100m of the target.”

“While being small in size and light in weight, our lander will be able to carry over 30kg of payloads.Its light weight and small size allow for frequent transportation of payloads to designated sites at designated times. Moreover, with standardized interface, the burden on the client will be significantly lighter. In the future, the lander may even become a transportation platform for lunar orbits, lagrange points, and other destinations in deep space.”

There is not much available on the blue lander. They’ve partnered with MT Aerospace and the German technology corporation OHB who was quoted saying “The companies have partnered on a future Blue Moon mission to the lunar surface – Blue Origin’s lunar lander capable of bringing several metric tons of cargo to the Moon.”

According to the company, Lockheeds new lander is capable of departing from the station, landing, staying for a couple weeks and then blasting off to rejoin the Lunar Orbital Platform Gateway. This prototype can allegedly transport 4 carriers, a dry weight of 24 tons and a fueled weight of almost 900 kg (2000 pounds). One round trip would fly in excess of 5000 m/s